On Wednesday we brought home some solar panels and an inverter and we finished installing them on the roof of our garage today.

We bought this set of parts from a local supplier, Cedel, so that we could pick them up. The panels aren't extremely heavy, at about 18 kg each, but they are large at 1.8 m x 1.1 m each and of course they're made of glass so quite delicate. As a result, this turned out to be one of the very rare jobs which couldn't be done by bicycle but luckily our son-in-law volunteered to drive with a trailer to collect the panels. Cedel sells a set of two 400 Wp panels with a Hoymiles HM-800 micro-inverter for €800, including a plug and play cable which can simply be connected to an electrical outlet, but I paid an extra €50 for an HM-1500 which can run four panels so that we can expand this system economically in the future. An expanded system will require wiring directly to the meter cupboard so that's another thing that I'll had to do if we decide to add those extra panels

Due to supply chain issues, standard mounting parts were not available. However, that's not really a difficult job. A quick bit of SohCahToa remembered from school and some literally back of the envelope calculations allowed me to work out dimensions for the substantial impregnated fence posts which I'd decided to use to construct the supports. 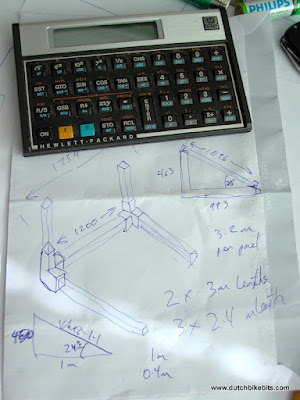 Our garden fence consists of 4 m2 panels each of which is held up by two fence posts of the same type shared with the next panel. i.e. there's about one post per 4 m2. This has stayed intact through every kind of storm for at least 20 years, and the only work I've had to do was to re-enforce a few panels  which gone rotten at the base where they're buried in soil. So I think the same type of wood is certainly strong and resilient enough in much shorter lengths when holding a 2 m2 panel at a 22 degree angle from horizontal.

It's recommended that 22 kg of ballast be used for each panel in our location and at the height of our garage roof. These supports much heavier than the commercial systems, already weighing nearly 20 kg for each panel, and I've added quite a lot of tiles from the garden, each of which weighs about 8 kg so in total including the supports we have about 70 kg of ballast per panel. This should be adequate. Note that while that sounds like a heavy thing to put on the roof, I weigh nearly as much as the ballast and panel combined and when I walk on the garage roof all the weight is concentrated in the area of one of my feet. The solar panels mounted in this way spread their similar weight over about 4 times the area that I do when I walk.

This took about two days to do, including all the measuring, lifting, cutting etc. We were also delayed by rain. It's a fairly easy DIY job. And if the panels generate around 800 kWh per year, then at next year's 60 cent per kWh price it'll take less than two years for them to earn back what they cost.

The parts were ordered last Friday and ready for collection on Monday. It then took me two days to arrange collection and today I finished installing this setup on the roof of our garage. It's almost impossible to get anything done quickly by someone else at the moment due to covid related staff shortages, but if you're willing to do some DIY most things can still be done quite quickly.

These aren't our first solar panels. Actually, we had 16 235 Wp panels installed on our roof ten years ago which still operate perfectly.

When the 16 panels were originally installed we expected that they'd fall a little short of covering our annual consumption of electricity, but actually they turned out to produce more than had been estimated and almost exactly the same amount as we used. Over time, our consumption has dropped quite a lot while production of the panels has stayed exactly the same for ten years, so for the last few years we've exported more electricity to the grid than we have taken from it. The only problem we've had with that system in the last ten years is that the inverter failed four years ago, but even though the manufacturer wasn't co-operative at all I fixed it at minimal cost and it's operated perfectly since then.

So you might wonder why we are now installing more panels. The answer of course is that we want to get rid of all our gas appliances. It's been known for many years that fossil fuels are endangering all life on the planet. This has to stop. We can't control everything, but we can control our own consumption. By continuing to buy fossil fuel we empower the companies that produce it and we just can't keep doing that. Insulating our home has already reduced our gas consumption for heating to less than an average small apartment, and we now cook entirely with electricity (the cooker only ever used a fraction of the gas that heating uses). We didn't replace our central heating boiler, which is old and inefficient, because buying a new boiler would lock us in to continued gas usage. Our low consumption is entirely the result of it not having much to do any more because the house is so well insulated. That means we could now economically replace our gas central heating with electrical heating, and that's even more true as of today with the extra pair of solar panels.

Heat pumps which could replace the central heating and heat the entire house in winter are still quite expensive and a bit hard to justify on price grounds, but we could install a small air conditioning unit which can produce heat with about the same efficiency as a heat pump in the living room as that's relatively inexpensive so that may be what we choose. We barely use any heating in the upstairs anyway.

We've also been experimenting with smaller scale solar power system. One of our daughters lives in a flat in Assen. Unfortunately we can't fit solar panels anywhere on the outside. The balcony might have been an option but it faces north west so only receives sun just before sun-down which means it's quite a pleasant place to sit on a summer evening, but doesn't make any sense at all for solar panels. The rear windows face south east, but there's no place outside on that side of the building. As there are no really good options I decided to experiment with mounting solar panels inside the double glazed windows. After all, if you don't try it you don't know how well it works.

The panels for the flat are a flexible type ordered from Aliexpress. I couldn't find them anywhere else. Luckily, one supplier has a depot in Poland which because it's inside the EU meant they were delivered to us promptly and without any unpleasant customs related surprises. These panels are a quarter of the size of the new panels that we've installed on the garage, just 1050 mm long by 550 mm wide. They're also really light in weight. As a result they're much easier to transport, I took both of these panels to the flat packed in their cardboard box by riding my bike with the box wedged under one arm. The inverter in this case is a Hoymiles HM-400, which operates quite well with two of these panels connected in series, though as it's rated for 400 W it's working well under maximum capacity.

It's still an experiment. We want to help our daughter with the ever rising energy costs, but will this be worth doing given that the output is quite low ? It seems that mounting the panels inside roughly halves their output. This will vary depending on the glass, of course, and also on the panels due to different panels reacting to different frequencies of light. One smaller 12 V / 20 W panel that I have at home loses only about 20% due to being held inside a double glazed window, but unfortunately these panels are affected to a larger degree.

In total this system cost about €360. Half of the price was for the solar panels and the other half for the inverter. In the first week that they were connected, in September, we saw about 0.25 kWh per day from the panels mounted inside the flat. At the end of the year my daughter's electricity will cost over 60 cents per kWh, so that's worth about 15 cents per day. If we estimate that the average over a year is about half that much the electricity generated by these panels will be worth about €27 a year, which means a payback period of over thirteen years which I think is too long by any way of looking at it.

How about if we add two more panels (connected serial/parallel - making the equivalent of one 400 Wp panel which is still within the specs for the HM-400) ? Obviously this would block another window. It would also increase the cost of the system by 50%, but output would increase by 100%, or perhaps even slightly more if the inverter wakes up earlier due to the increased output of four panels. The result is a would be a payback period of almost exactly ten years, if the electricity price stays at 60 cents per kWh, which is still not great, but it's not far off what I originally expected from the roof-top system. Of course if prices continue to rise then the payback period will become shorter, but they may also drop.

For now I don't desperately need these panels for another purpose so they can stay put for a longer experimental period, or until my daughter says she wants rid of them. They'd perhaps be more effectively deployed on the south west facing wall of our home where they'd pick up the early morning light without their output being reduced by being mounted behind glass, and pay for themselves in about 7 years. I think a set of four of these would make a fairly good easily transportable system for someone who lives in a rented apartment and has a south facing balcony as they'd then pay for themselves in about five years.

I've had a small flexible solar panel on my velomobile for over ten years. In summer it's kept the battery charged so everyday use didn't require plugging in a charger. Unfortunately, the circuit got damaged and I had to replace it. I decided that this time I'd use a much simpler circuit - a shunt regulator with a zener and a single transistor to limit the voltage to about 7 V. Current is limited by the panel itself, the internal resistance of the battery and because once the voltage gets close to the maximum the shunt starts to conduct a bit. This circuit does a reasonable job of keeping a NiMH battery pack topped up and it can't damage that kind of battery. Don't even think about trying this with a lithium battery. I built two of these so that Judy no longer has to charge the battery for her velomobile either: 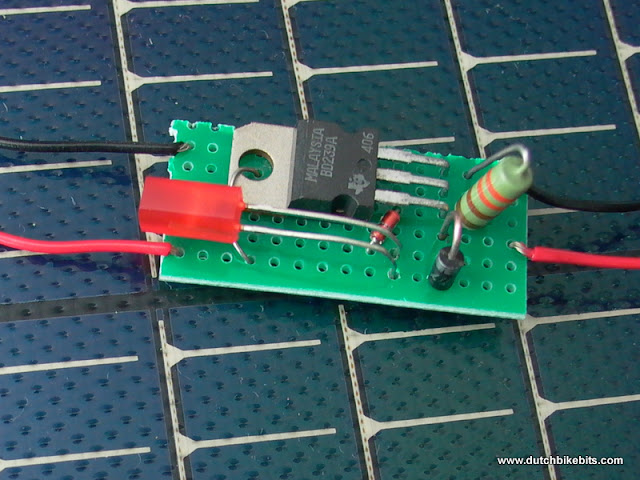 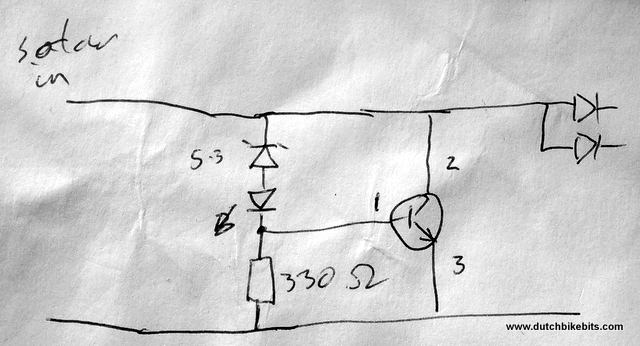 Of course I've not even tried to work out whether this is economical compared with charging from the mains. I had the parts and it's convenient for us.