Two megawatthours from the sun

This morning we reached another milestone with our solar energy installation. 144 days after installation, more than 2000 kWh had been generated by the solar panels on our roof. In the same period, we consumed just under 1300 kWh so we're currently generating at a significantly higher average rate than we consume electricity.

We reached the 1 MWh milestone 71 days ago on the 17th of June, so the second megawatthour took almost exactly the same time to generate as the first. I had hoped that July and August might see better average power output from the panels, but while we've had some very nice bright sunny days this summer, there have also been far more gloomy grey days than anyone had hoped for. If we lived somewhere that was more reliably sunny than Northern Europe then the performance of the system would be better. However even under these conditions the system is doing very well and we're ahead of where we need to be for the year.

Stats
In 144 days we've generated more than half the total amount of electricity that we expect to consume this year. Even with reduced output through the winter, when we'll see a drop from the current average of 15 hours of production each day, we have a very good chance of making up the rest of what we'll consume.

Our panels generated electricity worth about €370 at the price which we are billed. This is nearly 5% of the installed price of the system in less than five months. A simple extrapolation suggests that the system would pay for itself in just over 8 years if this rate of production is constant. We expect it to take a little longer (perhaps over ten years) including the effect of shorter and darker days in winter, though if the price of electricity rises over the next ten years, our pay-back period becomes shorter. 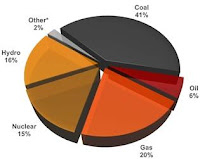 41% of total world electricity is generated by burning coal. If we had produced the same electricity from coal as we have from the sun this would have resulted in the emission of over 1100 kg of CO2 into the atmosphere.

The nice pie chart comes from the World Coal Association website. And just how gloomy was this summer ? We get the same weather as the UK, and there it was officially the wettest summer for 100 and the gloomiest for ten years.

Posted by David Hembrow at 14:41 No comments: