Back in the late 1980s I worked for a computer company in South London. One weekend I went into the public library in Bromley and found this splendid book on "Atomic Energy" was being discarded, so I paid 50 pence and took it home with me.

Martin Mann's "Peacetime uses of Atomic Energy" was first published in 1957. Mine is a "revised and enlarged" edition from 1961, is a time-capsule. It shows a remarkably positive attitude to all aspects of nuclear power. 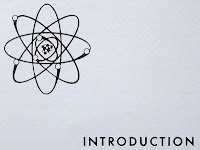 The first few words of the introduction in this book make a great start: "Somehow, a great many people still think of atomic energy as solely a military weapon. Yet this is not so. The fact that books like this one can be written without any references at all to weapons is one indication of atomic energy's usefulness in ordinary, peaceable pursuits".

It could be said that he's already, in those first few sentences, managed to mention the unmentionable. However, this is of course one of the many problems with nuclear power. It is forever linked with nuclear weaponry. 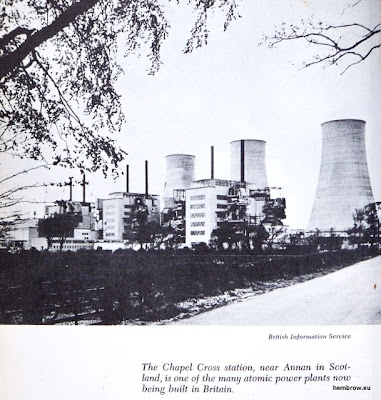 A few pages later, the book includes a photo of the then new Chapelcross nuclear power station in Scotland, it refers to this as simply "one of the many atomic power plants now being built in Britain", while making no mention that this particular station was always intended to produce plutonium and tritium for nuclear weapons as well as electricity.

That is the reason why this supposedly civilian facility also had an on-site processing plant run by the Ministry of Defence.

But we'll carry on. There's lot more to see.

The book attempts to look unbiased. In fact, it also includes the concerns of experts such as these:

What we have here is someone trying very hard to convince us that there is no danger at all of anything ever going wrong. Experts at "government laboratories" have "proved the BWR safe". Recent events at Fukushima demonstrate, of course, that things certainly can go wrong with boiling water reactors.

In fact, this confident statement is actually contradicted by other things in the book. For instance, this set of time lapse photos of an exploding boiling water reactor:
Where this reactor once stood is now a superfund site, targeted for environmental cleanup. The Borax 1 reactor was the forerunner of the SL-1 reactor. In January of 1961, the year in which my book was revised, this reactor suffered a steam explosion and meltdown which caused three fatalities. According to wikipedia, 790 people were exposed to harmful levels of radiation, and "The bodies of all three were buried in lead-lined caskets sealed with concrete and placed in metal vaults with a concrete cover. Some highly radioactive body parts were buried in the Idaho desert as radioactive waste." 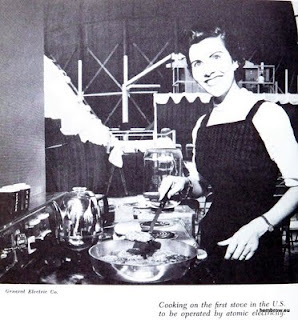 This information did not find its way into Martin Mann's book. However, other things did. Such as this photo of a woman "cooking on the first stove in the US to be operated by atomic electricity."

There are many interesting photos in the book. I'll present some of them below:

Genetic engineering 1950s / 1960s style ? Some of the new plants produced by the genetic mutations due to radiation in these experiments were beneficial and are grown for food. For instance, some grapefruit and peppermint varieties. Read more on the atomic gardening website.

This is the only discussion in the book of nuclear waste. It appears to be the author's view that 1950s nuclear scientists really had the answers so far as safe disposal of nuclear waste was concerned. This reminds me of the infamous Dounreay shaft, which is now being cleaned up at considerable cost. 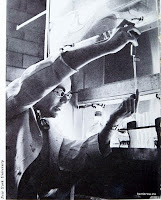 Between the photos of scientists in white coats who we really must trust, and optimistic pieces about how trains, aeroplanes, ships, cars and homes of the future will include their own miniaturized nuclear power plant and even suggesting the possibility of domestic self-running table lamps (I'm still waiting), there are many other highlights in the book.

While in the introduction there was talk of how we mustn't confuse nuclear energy with weaponry, the author later can't help but be impressed with the Hanford plutonium works where "Big reactors convert uranium 238 (the nonfissionable type) into plutonium atomic fuel." Hanford is now the most contaminated nuclear site in the USA.

These reactors which so impressed the author existed solely to produce plutonium for nuclear weaponry. They produced enough for most of the 60000 weapons in the US nuclear arsenal. For coolant, they used water from the Colombia river, which was returned to the river rather warmer, but also gained several terabecquerels of radiation every day. For decades, this was kept secret by the federal government.

The heat from all but the last of these reactors was, unlike Chapelcross, not used to generate electricity. It was simply thrown away as waste energy in the form of heat. The Hanford plant was a huge consumer of electricity generated by other means, as were other plants used to generate materials for nuclear weapons. For many years they consumed more electricity than New York City, while producing only weapons of mass destruction and considerable environmental harm as a result. When people talk about low carbon emissions of nuclear energy, they tend to omit things like this.

The book continues to urge us to be positive. We are told that "scientists in every field, from archaeology to zoology, benefit." and of the bright future of nuclear medicine. A chapter headed "Atoms for health" starts with the text "Soon after Pierre and Marie Curie discovered radium, they saw it used to save lives from cancer". It doesn't mention that radiation exposure was the cause of death for Marie Curie: "Her papers from the 1890s are considered too dangerous to handle. Even her cookbook is highly radioactive. They are kept in lead lined boxes, and those who wish to consult them must wear protective clothing." Pierre Curie didn't live long enough to be killed by radiation, instead falling to one of the biggest killers of our age.

Finally, this is one of my favourite photos from the book. It's captioned "The atomic age already promises better health and a longer life span for the average man and woman."

What I like about that photo is that it is so gratuitous. It has absolutely no meaning at all. Simple propaganda. Two smiling young people on the beach are linked with a spurious pro-nuclear message.

This book illustrates much of what is wrong with the nuclear industry. There is too much secrecy, it's too closely tied to nuclear weaponry, and most of all those who promote nuclear power are still lying to us. And that is where we arrive at the present day.

At Fukushima we have also seen secrecy, breaking of regulations concerning how the reactors should have been run, and experts providing assurances that no meltdown could possibly occur, and that it would remain a minor nuclear incident. However, then we saw a meltdown and today the alert level was raised to the same as that of the Chernobyl incident.

These assurances followed by things going not quite as the experts say they will have come time and time again over the entire history of the nuclear industry.

For example, in Dungeness there are constant erosion problem requiring that "Shingle extracted from north of Dungeness has been used by British Energy to maintain the shingle bund to the west of Dungeness power stations as part of a defence against any possible storm surges and coastal erosion." However, when a question was asked about this in parliament back in 1964, it was dismissed out of hand.

There is also a problem of externalization of costs. This comes in many forms, including subsidies for constructing plants, of claiming zero carbon emissions while ignoring the vast amount of energy and materials used to construct plants, mine, transport and process fuel, re-process old fuels, provide "safe" storage etc. Also, the costs of cleaning up the messes left behind by incidents also tend to be cleverly avoided. Who's paying to build a new sarcophagus for Chernobyl ? And what carbon emissions will produce ?

If the expensive British and American plants built to sell MOX now are not commercially successful, who pays ? And what energy have they used in their construction ?

Many people have pointed out that the deaths due to the tsunami and earthquakes in Japan are higher than those due to the nuclear incident. This may well remain true. However, only a nuclear incident can require vast areas to be abandoned for long periods of time. Look what happened at Chernobyl.

Quite apart from the debate which often rages about how lethal the Chernobyl incident was (I've seen people claim anywhere between 12 and a million deaths, neither of which seems necessarily to be plausible), how can one put a price on the cost of losing a huge region of a country, including populated areas and productive farmland, for decades, or perhaps hundreds or thousands of years ? In the case of Chernobyl, the exclusion zone had a 30 km radius. That makes for a 2800 square km exclusion zone. The Ukraine is a big place, but 2800 km2 is a 12th of the total land area of the Netherlands. Should this country's sole nuclear power plant at Borssele (which, incidentally, wants to use MOX fuel) suffer a similar incident, even if there were no deaths, who foots the bill for abandoning such a large percentage of a country ?

Even if such areas are declared safe at a later date, they will remain tainted in the minds of people. Who would want to consume food grown in the Chernobyl exclusion zone ? Who wants to move there or work there ?

Japan now has a 30 km exclusion zone around the reactor. It may only cover about 1% of the country, however a good part of Japan is mountainous and difficult to live in. So it perhaps covers a greater percentage of the area of Japan which is useful for food production and can be populated.

I wish the Japanese people the best in all of this. I hope that things don't get worse and that while they can't bring back those who have died in the recent disasters, they at least can quickly rebuild and repair the damage to their society and economy.

Daniel Mocsny suggested a very interesting video about relative costs and emissions of different energy sources, the problems with the British MOX plant keep getting bigger, and essential work at Chernobyl still hasn't been funded.
Posted by David Hembrow at 12:41 No comments:

Labels: nuclear power, what not to do
Newer Posts Older Posts Home
Subscribe to: Posts (Atom)