We knew we'd have to do something about the insulation of our home in Assen before we even moved in and every year we've made some change to improve the energy efficiency of our home. One of the oddities of 1970s Dutch homes is that while they had double glazing on the main rooms on the ground floor, it was quite common to have single glazing in places like the hall and all of the bedrooms upstairs. We fixed that problem eight years ago by installing HR++ double glazing to replace all the single glass and this was very effective. But we kept the same older windows downstairs.

It took a while for us to get around to considering the downstairs windows because we were busy with insulating the floor, the roof, the walls, installing solar panels on the roof, our bicycle parts business, and generally getting on with life, but we've now begun. In fact, we did one of the smaller panes last year because the old double glazing had developed a leak and we took this as an opportunity to experiment with triple glazing. We made measurements and found that it was effective. When the outside temperature was -2 C and the inside temperature 17.5 C the temperature of the inside of a double glazed pane was measured as 9 C while the inside of the triple glazed window alongside it measured 14 C. Clearly we could stay warmer with less heating if we replaced more of the old double glazing downstairs in our home with triple glazing.

Thus far we've replaced the glass only on the front of our home. We're still not entirely sure what we'll do on the back of house, but there is less than half the area of double glazing in the living room on the back compared with the front.

We hope this will reduce our gas consumption and our heating bill. We already have a very low energy bill because we generate more electricity than we use. The gas bill, which covers cooking and water heating as well as heating, is also low and has reduced each year. Dutch bills are increasing quite sharply this year due to increased tax on gas, but our estimate for next year is the same as this year, and the energy company doesn't know that we've taken measures which hopefully will reduce our usage further.

It's becoming more and more obvious to us that we can't continue to increase our energy usage but must decrease it. We must decrease our burning of fossil fuels. There is little time left to do this. The IPCC report from the 8th of October told us that emissions need to be reduced to zero in 12 years time. Who is doing enough to make that happen ?

Because of our concerns we are not only continuing to make our home more efficient but have also got rid of our car and stopped our business of offering holidays and study tours. Encouraging people to make international journeys to cycle is just not of this time. We must all stop behaving as if we can do whatever we like without consequences. Our children and our grandchildren, not to mention millions of people in poorer countries, are being made to pay for our own selfishness.

January Update: Is it effective ?

We will really only know how effective the triple glazing is after the bills come in and we see if we've used less heating. However it's -4 C in the garden today, the sun is still on the side of the house and the inside of the double glazing at the back measure 8.7 C while the inside of the triple glazing at the front measure 14.5 C. Obviously we are loosing a lot more heat through the double glazed panel than through the single glazed panel.

There's also a very visible difference in that ice crystals form on the outside the triple glazed panel, proving the temperature there stays below freezing while we have a more liveable temperature inside the house. This never happens with our double glazed windows. In fact the closest thing that I have seen to this in the past was when we had ice all over the inside of the upstairs windows of our house before we replaced the single glazed panels there with double glazing. That wasn't comfortable at all !

Update February 2019 - it's working !
The front of our home, with the living room, is now fully triple glazed while the rear with the dining area (open to the living room) and kitchen remain double glazed. There's now an obvious difference in temperature between the front and the rear which I can also measure. Seeing this graph in February 2019 led me to make a simple calculation of consumption of gas for heating:

I keep a spreadsheet of our monthly gas and electric consumption. We used less gas in January 2019 than any other January on record, even the somewhat colder 2017. Our gas consumption in January 2019 was 15% lower than the same month in 2016 when the temperature was very similar. A drop in gas consumption of 15% represents a greater than 15% drop in use of energy for heating because we also use gas for water heating and for cooking.

I only have one month of data so far so have to be cautious, but it appears that the replacement of the front windows with triple glazed panels has been effective. At this rate the windows will have paid for themselves in terms of nothing but a reduced heating bill within ten years even if there is no increase in the price of gas. That's a good rate of return and if it's possible I will replace the rear downstairs windows with triple glazing later this year. 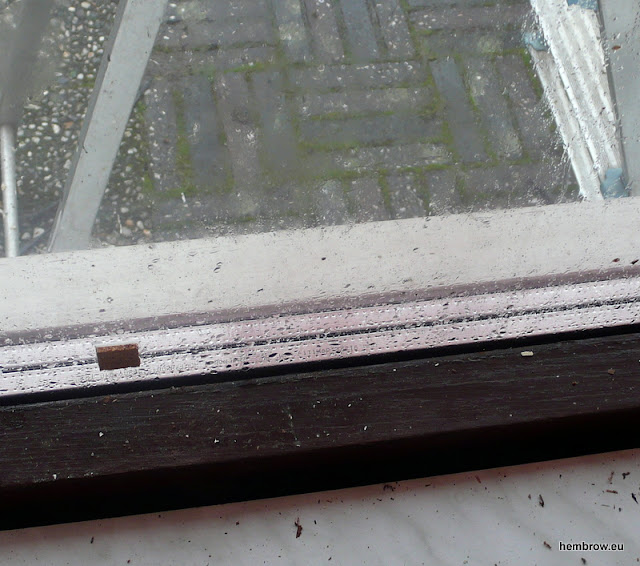 So now we're completely triple glazed downstairs except for the window in the back door of the kitchen.